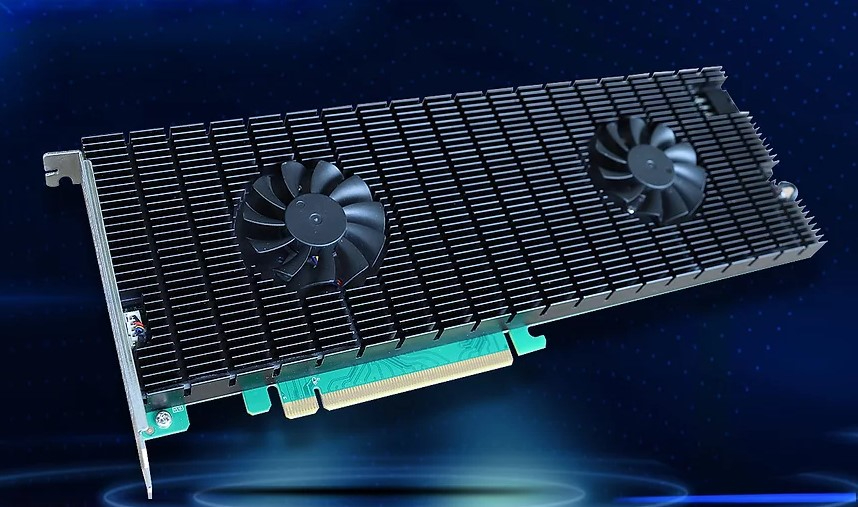 Have you ever wanted support for eight NVMe SSDs? You’re thinking too small. Imagine the possibility of plugging sixteen NVMe SSDs into your PC. You’ll never have to think about storage for the rest of your days. Well, Highpoint’s new NVMe raid controllers will allow just that and deliver some irresponsibly high SSD speeds to boot.

HighPoint launched a new series of RAID controllers (via OC3D.net (opens in new tab)) that can only be described as too much. The SSD7540 RAID controller supports up to 8 x 8TB Gen 4 NVMe SSDs for 64TB with read speeds up to 28,000 MB/s. The launch trailer above shows the single card getting a read score on Crystal Mark of 28,315.27MB/s and a write score of 27,952.95MB/s.

The SSD7140A supports Gen 3 SSDs but also supports up to 8 x 8GB SDDs. However, its read/write speeds are just half as fast as the SSD540. Though, 14,000 MB/s (28,000MB/s using Cross-Sync) is still pretty quick. Consider this a more cost-effective alternative if Gen 4 SSDs are a little too rich for your blood.

Anyone who needs 128TB of stupid fast SSD storage is using this for professional and enterprise purposes, considering how expensive the best SSDs are right now. Maybe you just need a place to store a copy of every anime ever made. But then, who knows exactly what will happen when DirectStorage games actually get released. Maybe we’ll need all that speedy SSD storage.